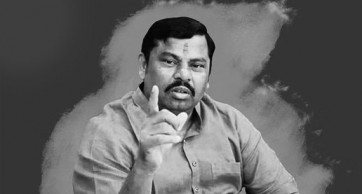 She requested the governor to direct the state government to quash the PD Act invoked against him and to ensure that he is released from the prison.

Usha Bai, along with Raja Singh's sisters, met the governor at Raj Bhavan and submitted a memorandum.

She alleged that the police booked cases against the MLA on baseless allegations and did injustice to him.

She alleged that the state government is targeting Raja Singh for questioning its "anti-people policies and activities".

Usha told the governor that the police had booked cases against her husband for even trivial comments and statements, which were tried in the special court constituted for the elected representatives. She claimed that the government failed to prove the charges in most of the cases.

Suspended BJP MLA was booked under the PD Act and sent to jail on August 25 for making derogatory remarks against Prophet Mohammad.

According to the police, 101 criminal cases were registered against Raja Singh. He is also involved in 18 communal offences.

The police said that Raja Singh has been "habitually delivering provocative and inflammatory speeches" and "driving a wedge between communities leading to public disorder".

Raja Singh's wife filed a petition in Telangana High Court challenging the PD Act invoked by the Hyderabad police against her husband.

Raja Singh is a member of Telangana Legislative Assembly from Goshamahal constituency in Hyderabad. BJP suspended him from the party after he uploaded an offensive video on a YouTube channel last month.