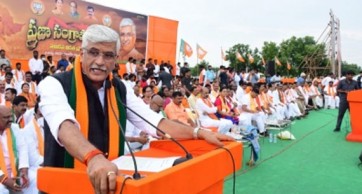 Shekhawat blamed the 'wrong' design and 'poor' engineering for the submergence of three pump houses of the project in the recent floods.

He also claimed that the project was constructed without investment and environmental clearance.

The Union minister alleged that Chief Minister KCR, as Rao is popularly known, built Kaleshwaram as a money-making machine.

Shekhawat was addressing a public meeting organised by the BJP at Yadadri to launch the third phase of the 'Praja Sangram Yatra' of the party's state unit chief Bandi Sanjay Kumar.

On KCR's demand that the Centre should accord national project status to Kaleshwaram, the minister said that to cover up his failures, KCR wants to impose the 'illicit' works on the Centre.

He said that KCR gave birth to a child and now wants Prime Minister Narendra Modi to give his name.

The BJP also came down heavily on KCR for dynasty rule and corruption and alleged that he has pushed Telangana into a debt trap.

Shekhawat said a state which had a surplus of Rs 370 crore at the time of its formation in 2014 today has outstanding debts of Rs 3.5 lakh crore.

Shekhwat also gave a call to throw out the TRS government to free Telangana from corruption.

"Time has come to secure justice for the people of Telangana, to free Telangana from corruption and to send the corrupt to jail. For this, we have to form a BJP government in the state," he said.

The Union minister urged BJP cadres to reach out to every village and house with the policies and schemes of the Narendra Modi government at the Centre to strengthen the BJP and bring it to power in the state after the 2023 Assembly elections.

He further alleged that KCR has failed to deliver Telangana the dream of the martyrs and that only the interests of his family are dear to him.

"I want to challenge KCR to be ready to vacate his seat as the BJP will come to power soon," he said.

Shekhawat also claimed that the massive support to Bandi Sanjay's yatra shows that the people of Telangana want a change.