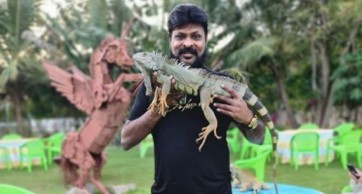 Houses, farmhouses and other places belonging to Praveen Chikoti and Madhav Reddy in the two Telugu states were searched by the Enforcement Directorate (ED) for alleged violation of the Foreign Exchange Management Act (FEMA), and the agency has reportedly found evidence of Chikoti's transactions with some actors of Tollywood and Bollywood.

He had allegedly taken 10 celebrities to Nepal, and also made promotional videos with the celebrities.

Allegedly involved in 'All In' Casino Vegas by Big Daddy at Hotel Mechi Crown Jhapa in Nepal, the two organised high stakes gambling for Indians who prefer to indulge in the safety of a neighbouring country.

The casino dealers allegedly arranged special flights to take punters to Nepal in June. For the four-day package, each gambler was charged Rs 3 lakh towards flight charges, hotel stay, food, and entertainment.

The ED carried out searches at Chikoti's house at IS Sadan in Hyderabad and farmhouse at Kadthal on the city outskirts. The searches which began Wednesday continued Thursday.

The central agency seized a laptop and mobile phones of the suspect. The officials were collecting information about his transactions with celebrities.

They were also reportedly going through the bank transactions of both the suspects.

The two are also suspected to have facilitated the transfer of the stakes at the casino, running into lakhs of rupees, through hawala channels.

Both of them have been summoned by the ED for questioning. Sources said based on their statements, others may also be summoned.

Meanwhile, responding to the ED notice, Chikoti said the ED officials sought certain clarifications. "I will answer their queries," he told reporters.

He evaded replies when asked if he arranged a special flight to take celebrities and punters to Nepal.

Chikoti and Reddy are also suspected to be involved in organizing the casino at Gudivada town of Andhra Pradesh's Krishna district in January. The casino during the Sankranti festival in January this year had triggered a major controversy.

Popular as 'PC' in gambling circles, Chikoti is known for its flamboyant lifestyle. He displays this lifestyle on social media handles. He posted a video of taking his favourite pet python for a drive on his Range Rover car.

Claiming to be a part of Big Daddy casino in Goa, he revealed that his recent birthday celebrations were attended by several Bollywood and Tollywood stars.

A huge crane was organised to garland him during the birthday celebrations.

Chikoti was arrested by Hyderabad police in 2007 during a raid on a star hotel. He was arrested along with 40 others for organising gaming with punters.